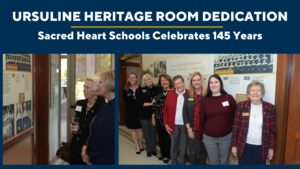 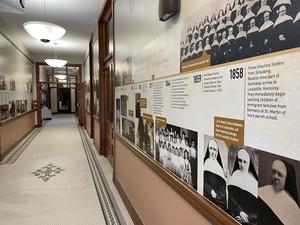 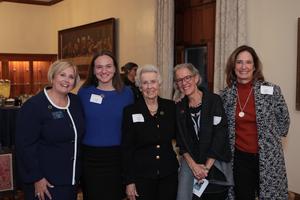 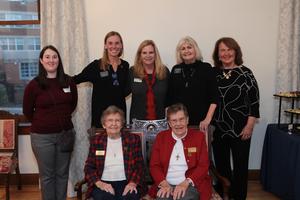 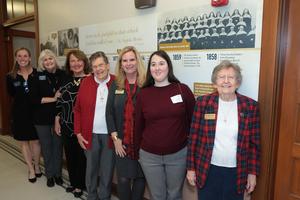 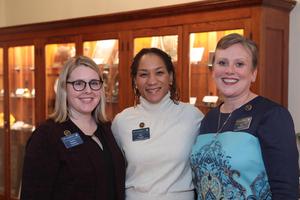 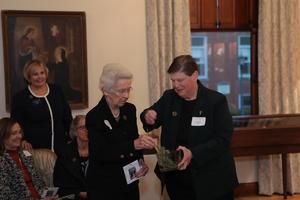 The Ursuline Heritage room in the Motherhouse on Ursuline Campus was designated thanks to the generosity of Barbara Duerr Trompeter, SHA Class of 1950, and her late husband, Bert Trompeter, to honor the Ursuline Sisters. The room’s cases hold artifacts and photos celebrating the service, faith, influence, and legacy of the Ursuline Sisters of Louisville. Sister Jean Anne Zappa, OSU, Dr. Karen McNay, president of Sacred Heart Schools, members of the Trompeter family, and representatives from the Board of Trustees, Ursuline Sisters of Louisville, and Sacred Heart Schools were all in attendance.

Those gathered also acknowledged the work of a committee of Ursuline Sisters, Ursuline staff, SHS staff, and alumnae, who so diligently and thoughtfully worked to bring the legacy of the Ursuline’s work on Sacred Heart Schools’ campus to life through the creation of a timeline installed on the walls of the main Motherhouse hallway. The committee worked for almost two years on the project. Thank you to the committee: Megan Brumleve Theisen '95, Carol Kunk Butler '68, Sister Martha Jacob '53, OSU, Nannette Mershon '67, Amy Olson, Sister Janet Marie Peterworth, OSU, Sister Judith Rice '62, OSU, Laurel Wilson, and Kathy Williams.

The timeline was brought to life visually in the hallway that is now used to welcome all guests visiting Sacred Heart Schools. Director of Alumnae Relations, Megan Brumleve Theisen, SHA '95, said, “I like to think that the timeline wraps itself around the Heritage Room – a space that holds great meaning for the Sisters - in a way that represents the love and respect that our community of students, alumni, parents, past faculty and staff have for the Sisters and the gift that they have given us of 145 years of an Ursuline Education on Lexington Road.” Special thanks to Laurel Wilson for her time and commitment to identifying the photos to tell the story and to Kathy Williams for her outstanding design work.

Those in attendance also heard from Dr. McNay and the members of the newly created Office of Catholic Identity and Ursuline Charism at Sacred Heart Schools before having time to peruse and enjoy the timeline. The office consists of Mia Cooper, Vice President of Mission and Community, Jane Cruthirds, Director of Mission Formation, and Andrea Hoback, Campus Minister, and was created to purposefully engage students and our community in the Ursuline core values, in meaningful service to others, and in opportunities to experience our broader world more deeply.

Throughout the month of October, Jane Cruthirds has been sending “Mission Monday” messages to employees at all four Sacred Heart schools to educate and celebrate the founding of the Ursuline Sisters of Louisville and the establishment of our four schools--Sacred Heart Academy, Sacred Heart Model School, Sacred Heart Preschool, and Sacred Heart School for the Arts.

We concluded the monthlong celebration of Ursuline education on October 31, the day in 1858 when three Ursuline Sisters arrived in Louisville from Germany. Mother Salesia Reitmeier (age 26), Sister Pia Schoenhofer (age 26), and Sister Maximilian Zwinger (age 50) journeyed by ship to the United States and then by boat to Louisville with today’s equivalent of $22.50 to cover expenses and as seed money for a convent.

The Ursuline Sisters from Straubing, Germany were invited to travel to Louisville in support of the German immigrant community located near St. Martin of Tours. They made their home on East Campbell Street in Louisville and began their work at St. Martin school on the corner of Shelby and Gray Streets.

Within ten years the Ursuline sisters established a grade school for girls; a high school that took boarding students (Ursuline Academy of the Immaculate Conception); a training school for teachers; a novitiate (a program for girls seeking religious life with the Ursulines), and built a small convent and chapel.

At the time of Mother Salesia’s death in 1868 at the age of 36 the Ursulines numbered 36 professed sisters, six novices and five postulants. They oversaw five parochial schools and Ursuline Academy.

In 1877, under the leadership of their second Mother Superior, Mother Martina Nicklas, our campus was purchased and the teaching mission of the Ursulines was brought to Lexington Road. 145 years later, we are a strong campus of schools which embodies the Charism of the Ursuline Sisters of Louisville and St. Angela Merici.  (Learn more of the story here.)

The legacy of our Ursuline Sisters is dynamic, evolving, and visionary. It demonstrates how “a contemplative love of God and a resulting openness and eagerness to serve the needs of others” can change the story of an entire community. The Catholic educational landscape of Louisville would be radically different if not for the Ursuline Sisters of Louisville. We are grateful for their work which gives us the opportunity each day to inspire diverse learners to become globally minded, compassionate leaders.