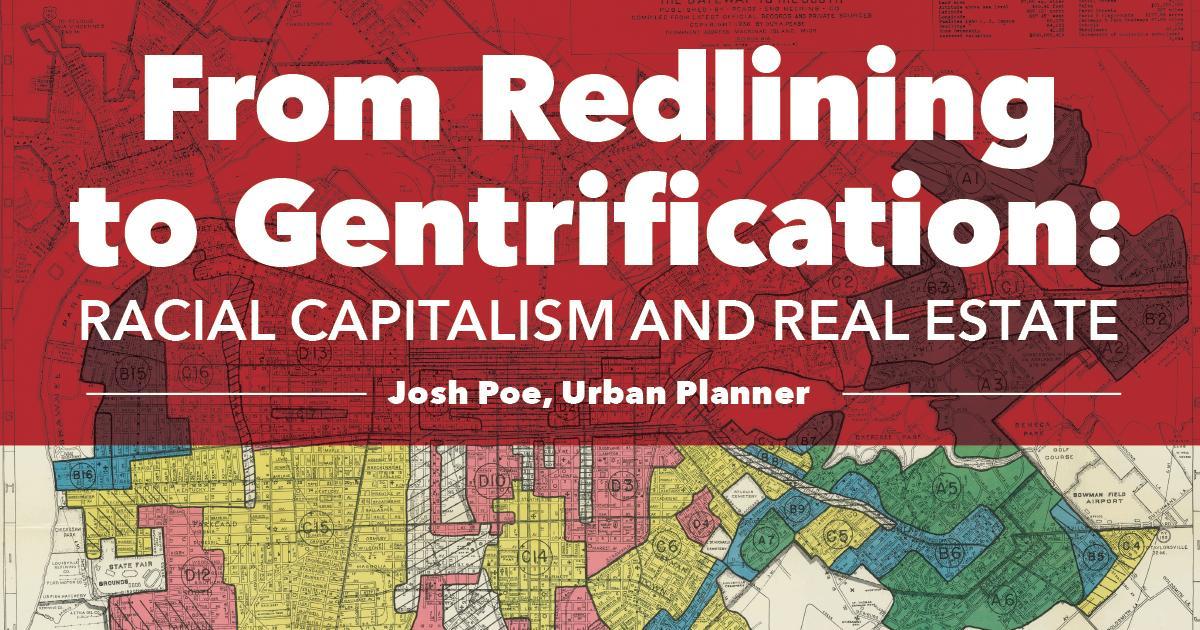 From Redlining to Gentrification: Racial Capitalism and Real Estate

This presentation will explore how racism was codified in the U.S. economy through 20th century real estate science to create an uneven housing market that systemically excludes and dispossesses Black people from housing and home ownership. Central to this concept is the impact of structural discrimination in federal urban planning and housing policy and the far-reaching impact they have had on urban geography and economics. The presentation will explain the concept of racial capitalism, how white wealth was contingent upon Black exclusion and wealth extraction, and how the professions of city planning and design were intentionally weaponized to isolate Black communities to prevent access to jobs, housing, capital, and the accumulation of generational wealth. The presentation will also discuss how the legacy of redlining is furthering current patterns in gentrification, dispossession and erasure. This session will end with suggestions for combating systems of oppression by placing more of the public decision-making process in the hands of communities, along with the importance of local collective power building for policy change.

Josh Poe is the Co-Principal Investigator at Root Cause Research Center. He is an urban planner, community organizer and geographer. He has over 20 years of scholarship, activism and practical experience in planning, urban land policy and housing issues. Originally from Eastern Kentucky, he began his career doing grassroots organizing around housing, labor, and economic justice issues in Seattle, WA in the late 1990s. In 2017 he authored and published the interactive storymap, Redlining Louisville: Racial Capitalism and Real Estate, which received recognition from Harvard’s Kennedy School of Government in its effort to recognize best-in-class data visualizations. His research and activism are foregrounded in exposing racial capitalism in real estate science, creating countermaps to institutionalized planning curriculum, and using cartography and organizing to combat dispossession and displacement.

His maps, data analysis, and research have been used and incorporated into the work of the Kresge Foundation, the Robert Wood Johnson Foundation, The Charles Hamilton Houston Institute for Race and Justice at Harvard Law School, the National League of Cities, the National Trust for Historic Preservation, CityLab, the Urban Equity Lab, the Federal Reserve Bank of St Louis, Next City, Teaching Tolerance magazine, the school district in Hamburg, Germany, as well as a host of local and national education, research, public policy and planning organizations. 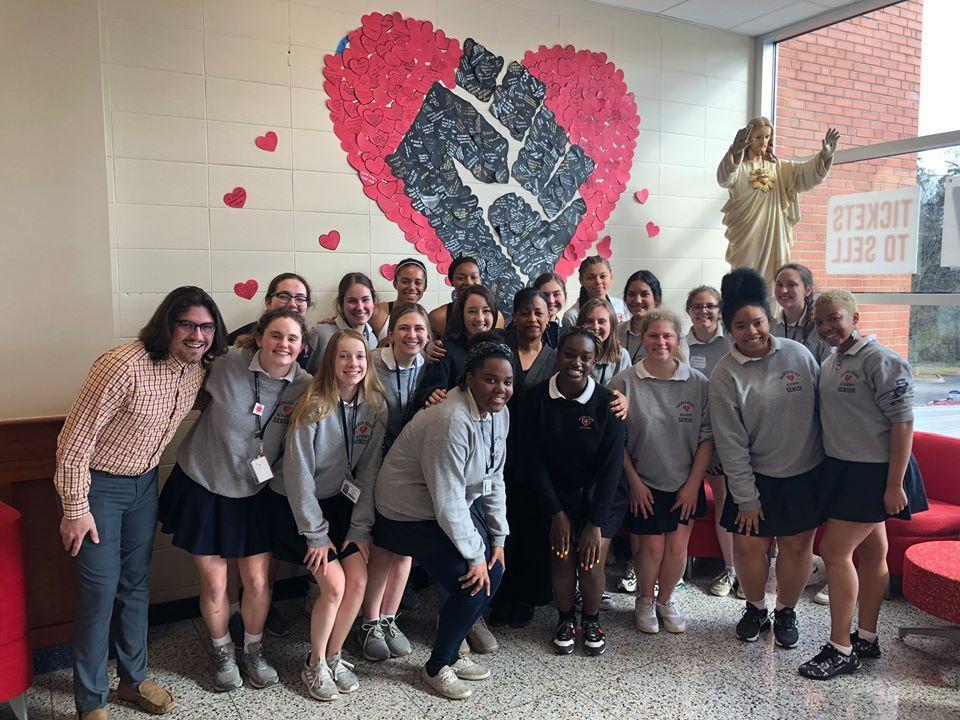 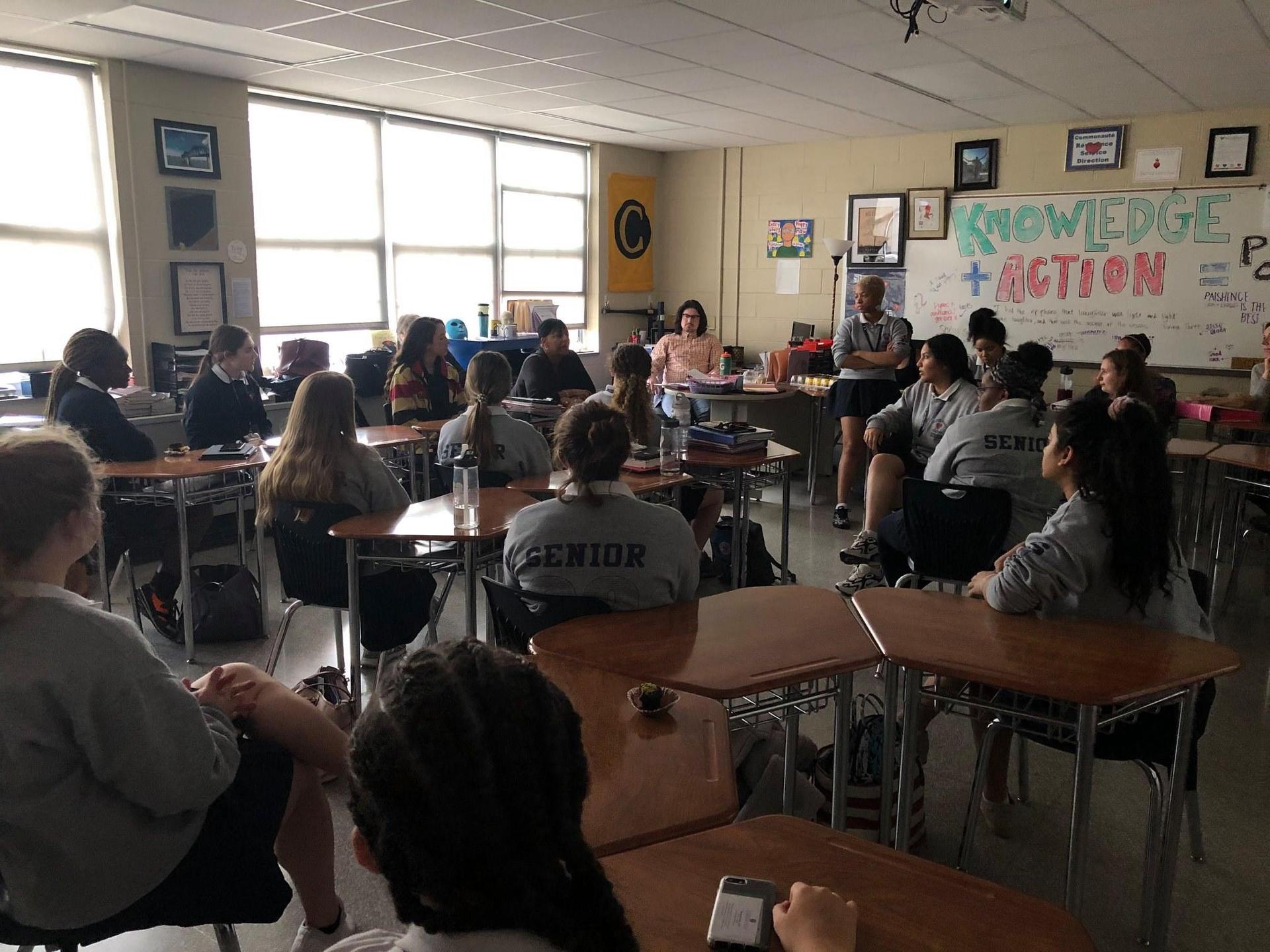 In March 2020, SHA's Black Student Union welcomed 1971 alumna Gayle Lockhart Butler and her granddaughter to speak with students about her experience at SHA. During her four years, Gayle was the only black student in the building. She told of the feeling of walking the halls and not seeing anyone that looked like her and spoke candidly of some of the toughest encounters throughout her years. But Gayle also shared that she had amazingly supportive and wonderful friends and teachers, and that one of her best memories is of being chosen Prom Queen by her class. Hearing from alumnae is always special to our Valkyries and this was definitely one of those times. We thank Mrs. Butler for sharing her time, experience and advice with our teachers and students. 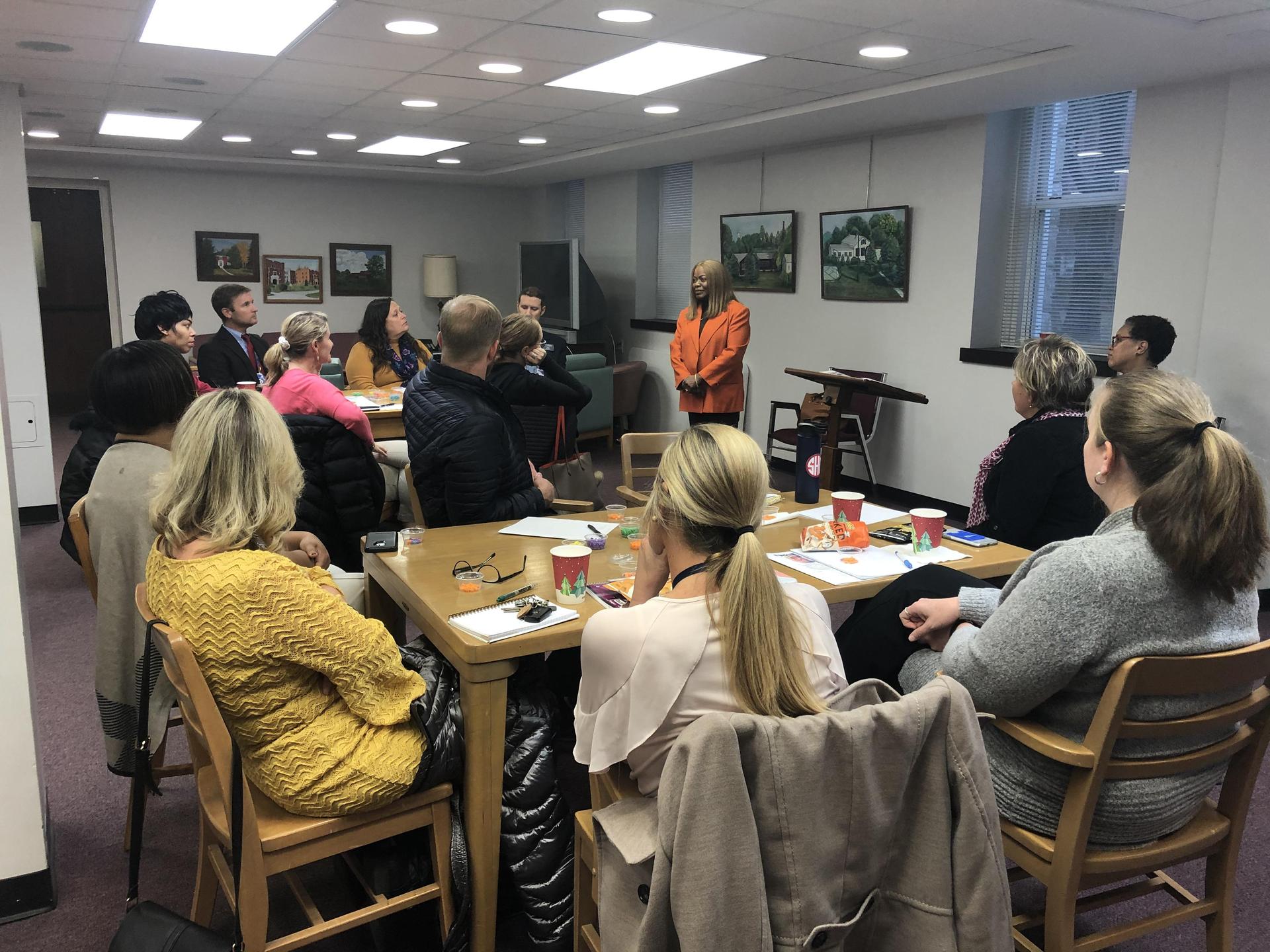 Annette Mandley-Turner and Janice Mulligan from the Archdiocese of Louisville Office of Multicultural Ministry led a diversity and inclusion workshop for Sacred Heart Schools leadership and faculty in November 2019. The workshop, brought to SHS by Director of Mission Effectiveness, Amy Olson was meant to provide a context for understanding diversity of culture, personal faith journeys, and skills for inclusive ministry and teaching, and was a follow-up for several to the completed Archdiocese Multicultural Ministry Certificate Program. 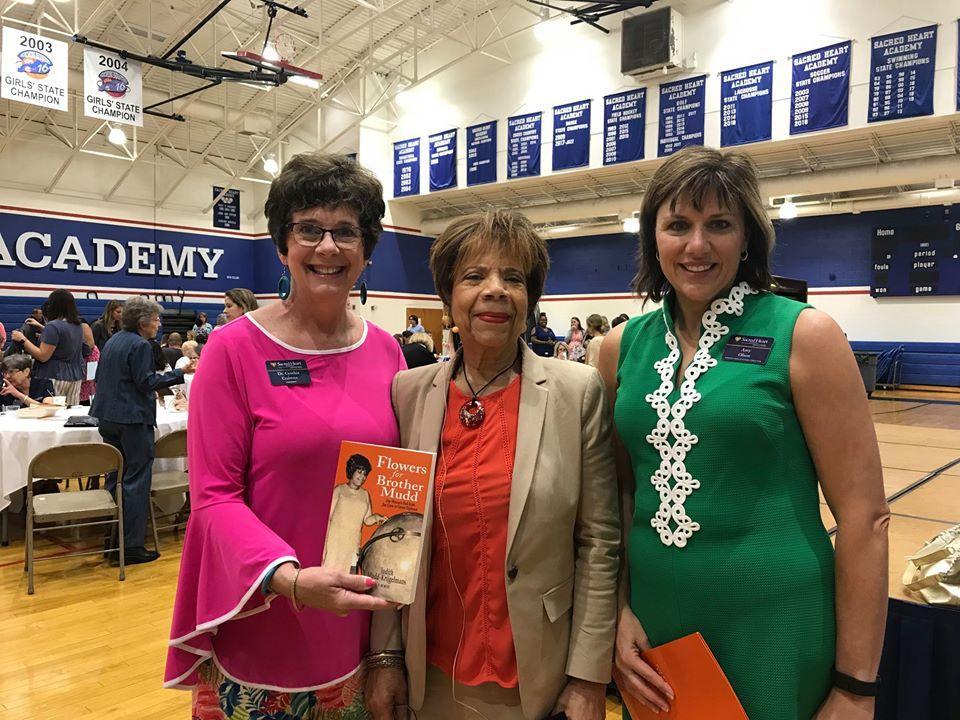 Mudd-Krijgelmans was born and raised in Louisville, KY during the last days of racial segregation and in the midst of the civil rights movement. Being educated in Catholic schools, she was challenged to learn outside the narrow confines of the community she lived in.

Judith attended Ursuline Academy before graduating at Morgan State in Baltimore, secured a summer internship at the Peace Corps headquarters in Washington D.C. and was awarded a Fulbright Scholarship to study and teach in India. After obtaining a Master’s degree from American University, Judith worked as a speech writer for Harlem black Republican lawyer Gloria E.A. Toote, then assistant Secretary of Housing and Urban Development. From here she achieved her dream of joining the Foreign Service and worked in public diplomacy in New Delhi, Mumbai, Dhaka, Taipei, Hong Kong, Brussels, Libreville, Bujumbura and Brazzaville.

In her memoir, Flowers for Brother Mudd: One Woman’s Path from Jim Crow to Career Diplomat, Judith explores the paradox of an African American who craved a wider future. She discussed her humble, yet happy beginnings, globe-trotting career and subsequent memoir with Sacred Heart Schools. 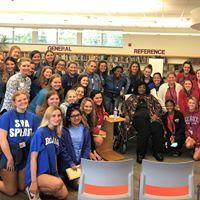 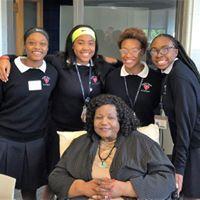 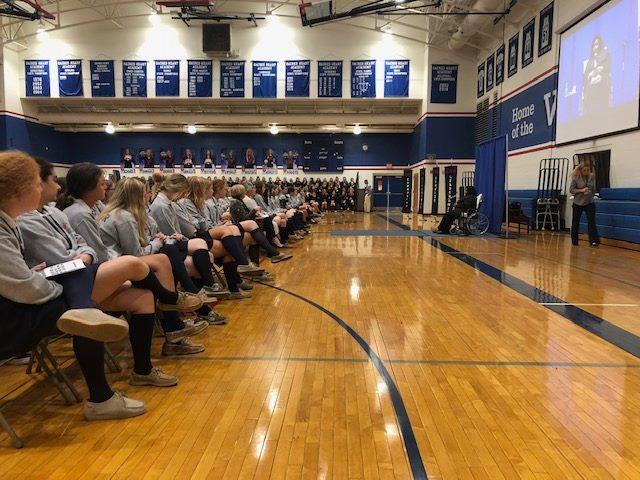 On October 4-5, 2018, Dr. Melba Pattillo Beals spoke to our entire SHA community, sharing wisdom and wit, and an unshakeable faith in God. Beals’ life is defined by her commitment to truth, social justice and equality for all. While she is best known as one of the Little Rock Nine, a select group of African American students who braved mobs, threats and physical attacks to integrate Central High School in Little Rock, Arkansas in 1957, she has also had successful careers as both journalist and educator.

As we listened intently, she taught us, “the greatest gift you can give someone is to listen to them,” a poignant reminder in a world that too often forgets. When asked by a student how she dealt with the oppression and hatred, she said, “when you’re in God’s group, you can’t be left out.” Dr. Beals deftly connected her experience to that of any teen who feels alone or mistreated, and inspired the girls to wait for the best people to come along. Dr. Beals also met with small groups of SHA students and gave each group, each girl and each question her unwavering attention and care. What an honor it was to learn from her about the importance of continually building your relationship with God, of valuing and respecting every human being, especially those who do not look or act like you and learning and growing from every experience. We will never forget our time with Dr. Beals.